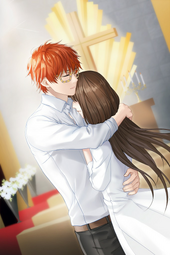 Even though the party isn't crowded by guests, the remaining RFA members - Jumin, Zen, Yoosung, and Jaehee - still take care of the party and greet people. In his speech, Jumin mentions that some of their members are not present due to circumstances and mentioned that he hoped that God will protect them (Jumin is a Christian, which is mentioned in a chat room). Meanwhile, Seven - along with MC - visits the Catholic church he used to go in his childhood. While asking for God's protection, Seven hugs MC, and confesses how grateful he is to meet "someone with the holiest love". He promises that he will love and protect her until his last breath. As he releases his hold on her, Seven asks her, "Shall we start again after a kiss?"

If the player is serious towards Seven and doesn't engage in his playfulness, on the 7th Day, Unknown breaks into Rika's apartment via the window, and the player decides to go with him when he promises her a paradise. Seven arrives too late before he is able to stop them. At Mint Eye, he takes disturbing pictures of her and sends them to Seven in an attempt to make him suffer. It's implied Seven still can't focus on his work, which causes Saeran to take all of RFA's information. 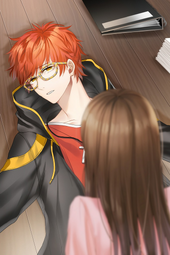 If the player is playful towards Seven and doesn't engage in his seriousness, on the 9th Day, Seven loses motivation and feels as though he doesn't deserve anything anymore, his emotional problems unsolved. When the player pushes him down in an attempt to get his attention, he does not reject her, and, under the player's suggestion, he comes to the conclusion that Saeran cannot be saved. He believes that Saeran is happier where he is now than he can ever be in his life and gives up trying to find him.

Seven clings onto the player, believing that she is an angel sent by God to end his suffering. He decides to quit RFA and run away to a different country with her. As they pack up and drive away, he plans on abandoning his car to use a tractor so that they won't be traced, and spend the rest of their lives at sea. Through the player, Seven returns to his playful personality he used in the messenger, realizing that he wants to live happily before he dies. He speeds up his car in the process.

If the player doubts Seven and sides with Saeran, on the 10th Day, after she and Seven show the contents of the floppy disc to Saeran, Saeran insists that Seven had put the pictures on the disc himself. Suddenly, he believes them and offers to lead them out of the building. The player is suspicious, but follows anyway. As they walk, Saeran asks Seven to teach him how to hack, but Seven turns him down, not wanting him to be involved with such a risky job as his.

Seven and the player realize too late that Saeran had tricked them and led them into a trap. Saeran initially plans on keeping the player to torture her whenever Seven doesn't listen to him, but Seven begs him to let her go in exchange for himself. Saeran agrees, thrilled to see him at his mercy, and keeps Seven as his prisoner to force him how to teach him to hack so that he will eventually replace him in his daily life.

When Unknown breaks through MC's window to kidnap her and take her to Magenta, Seven does not come to save her in time. Unknown snickers to himself about how he has total control of the secret security system, and that MC should "forget about that red-haired boy". He murmurs that he's going to take her to paradise, before escaping with the MC.

When the player and Seven infiltrate Mint Eye, they encounter Saeran. At first, things go as expected. Saeran is bemused to find them hacking his computer, and makes threats about how he's going to hurt them. When Seven and the player show Saeran Seven's floppy disc filled with photos, Saeran begins to have a panic attack. As he stutters between his desire to shoot them right then and there and needing his "meds," he quickly grows more unstable.

Seven tells the player to run out of the building and that he'll take care of Saeran. Saeran continues to break down meanwhile, rambling about how he needs his savior, referring to them as his new "mother". He also deflects this on to the MC during his breakdown, saying that she shouldn't leave "like Saeyoung left". During his breakdown, he asks Seven to hug him for one last time. Seven does so, and as Saeran whispers that it feels warm "like the home Saeyoung used to talk about them going to together," he asks Seven to wait for him there, before shooting and killing him. 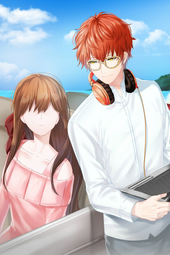 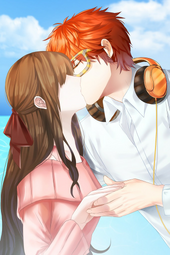 The player and Seven do not attend the party, opting to find Saeran and Vanderwood instead. The RFA held the party nonetheless, with Jumin giving a welcome speech and expressing solemn condolences that half of the members were unable to attend despite their hard work. As Jumin is frustrated with the lack of transparency, he tells the party-goers about his disappointment about RFA hiding secrets and thanks the player and Seven, addressing him by his real name, Saeyoung.

While on the road, Saeyoung attempts to trace Vanderwood and Saeran, leaving Vanderwood a threatening voice message. At the same time, he and the player listen to Jumin's speech via RFA's radio feed, joyful that Jumin called him by his real name. Likewise, he asks the player to call him by his real name from now on as well, as he has reconciled his false identities as the happy-go-lucky 707 and the hopeful Luciel. He kisses the player, hoping that he can overcome his dark past with her help. 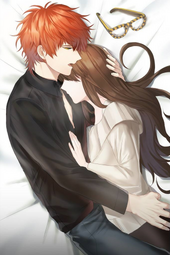 While still pursuing Saeran, Saeyoung holds the player as they lie on a bed, confiding his fears and his desire for a future with her. He asks for her consent to let him "embrace" her so that in case he does not survive, he would leave evidence of his existence.

Later, in a chat room with the rest of the members from RFA, including a changed Saeran, they make plans to visit Saeyoung and the player's toy shop, which he opened up after quitting his job as a secret agent. When they arrive at the entrance, they notice it is designed with a security system so tight that, as Jumin comments, it feels like Seven somehow managed to bring an underground bunker to the surface.

As the members try to guess the password and get into the shop, Saeran steps in to crack the code with his Arabic dictionary. In the process of reciting the password, he suddenly tells Saeyoung to wake up into a cruel reality, revealing that Saeran being saved was merely a dream.

In addition to the usual After Ending scene, two Secret Endings will become available once Seven's Good Ending has been obtained, each consisting of 7 mini-episodes that require 30 hourglasses to unlock each episode that follow the events after Seven's Good Ending.