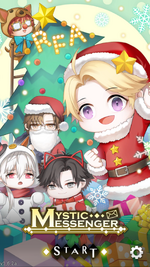 Christmas Special 2016 is a Christmas DLC, as well as the game's very first DLC, that had been released on 19th December 2016, along with the v1.6.0 update for both Android and iOS. It consists of two days of gameplay, eight endings, fully voiced Visual Novels, special ringtones, 25 new Album images and three new BGMs.

100 hourglasses are required to unlock the DLC. Players are recommended to save any progress before starting on the Christmas DLC as choosing to play it will start a new game progress, therefore overwriting any existing game progress that has been unsaved. Once the DLC has been purchased, it will be permanently available to the player, thus allowing the player to access the DLC at any point of time.

The DLC can be found under the DLC option at the bottom right of the main menu (or main lobby), which has been newly added along with a revamped appearance of the main menu following the v1.7.8 update. In addition, the gameplay UI has also been changed to exhibit a Christmas theme, much like the Halloween update.

For phone calls that are made over the course of the DLC, see also Phone Calls

Retrieved from "https://mystic-messenger.fandom.com/wiki/Christmas_Special_2016?oldid=31716"
Community content is available under CC-BY-SA unless otherwise noted.