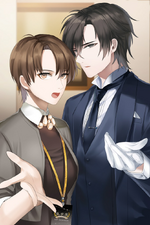 If the player raises Jaehee's affection but fails to invite enough people to the party, they will get her normal ending. The player arrives at the party and is greeted by Yoosung, who comments on how few people showed up. Zen arrives next and begins to flirt with the player before Yoosung points out who they are. Yoosung leaves to find Jaehee and when he leaves, Jumin walks over and asks the player to speak with him privately. Jumin offers the player the position as his assistant claiming that since the player and Jaehee are close, they will both work similarly. Jaehee finds the two of you and tries to talk you out of taking the job, stating how difficult the work is and instead offers you the opportunity to open a small bakery cafe with her and "live the dream."

You convince Jaehee that she has too much work to do and that you should be the one to visit and take care of Zen while his leg is broken. The ending begins with a visual novel of 707 picking you up and taking you to Zen's house.

When the two get there Seven explains that it was V's orders to put the player and Zen in the same place so it would be easier to protect them. When 707 leaves Zen asks if you have feelings for him. A chat then opens up with Jumin where he checks that the player is safe at Zen's house.

Jaehee enters next and has a moment to ask about the player's safety before being bombarded with more work from Jumin. Nevertheless, Jumin does have good news for Jaehee, which she hopes to be a vacation. Unfortunately for her it is only the news that a convenience store will be opening up on the main floor of the building.

Jaehee appears to be happy with this and leaves just as Yoosung enters. He expresses his fear of getting a job and promptly leaves. Another visual novel set three years later opens next. The player is now married to Zen and has gathered with him, Yoosung, and Jaehee to celebrate her earning another pay raise.

Jaehee appears to be sick, claiming that she must have drank too much the day before and will not be drinking today. Zen mentions that she's been looking more and more sick every time he's seen her and Yoosung reminds her how her doctor told her that she shouldn't be drinking. Zen then says that Jaehee should think about seeing people and getting married, which makes Yoosung jealous.

Yoosung wonders when he'll be able to be in a relationship to which Zen replies that he needs a job first. Jaehee says that she can recommend places for Yoosung to look but Zen remarks that the player looks upset at how Jaehee's life has turned out. Jaehee says that there is no need to worry about her and states how lucky the player is to have Zen at their side.

Zen starts flirting with the player again which makes Yoosung cringe. Jaehee decides to leave and give the two of you some privacy. Before leaving she says she tells the player she wanted to talk to them more and wishes them happiness.

If the player insists that Jaehee needs to focus on her work rather than encouraging her to relax, there is a visual novel in which Jaehee returns to the C&R building. Jumin asks why she is there so late, and she says that she is retrieving some documents she left behind. However, it is evident that she is weakened and sick, and as she moves off screen, there is the sound of her collapsing. Jumin informs the player in a chat that Jaehee has passed out from exhaustion and is being taken to the hospital.

In the hospital, Jaehee slowly wakes to the sound of one of Zen's shows being played on the TV and is greeted by a relieved Yoosung. Jumin is there as well, and he takes responsibility for overworking her. Jaehee resigns from her position as Jumin's assistant, saying that she feels as though she is broken and that she can no longer do her job.

If the player consistently takes Jumin's side and covets Jaehee's position, there is a chat in which Jumin announces to Jaehee and the player that he has decided to hire the player in Jaehee's place. Jaehee is wary and attempts to argue against it, but the player is determined. They meet Jumin in the C&R building to sign the contract immediately.

The visual novel shifts to two years later. Jumin harshly reprimands the player for getting him the wrong style of shirt and complains about the way they keep making small mistakes. He says that they are not as good a worker as Jaehee was, but that he continues to keep them around because of the player's loyalty to him, which he now values more than meticulousness and efficiency.

When Seven mentions that the messenger has been hacked, he warns the player to stay inside, as she tends to step outside when making phone calls. Because the player did not participate in the chat rooms, she was unable to see the message.

On the night of the 6th Day, the doorbell will ring. When the player answers it, she sees Unknown waiting at the front door, arriving to escort her away, seeing as she "didn't seem to want to play this game any further."

On the 10th Day, right after Jumin steals and crashes one of Seven's cars, Jaehee comes onto the chat room asking if he's okay. Jumin returns from the crash unscathed, but he realizes that his phone is not accepting calls properly. Jaehee and Yoosung, who logged in the chat room no later, discover that their phones are also bugged and disconnect whenever it seems they would connect to a call.

Later, Unknown enters the apartment and approaches the player from behind, ready to take her away. He mockingly tells her that she and the other members of RFA should not have dropped their guard once V had attempted to solve the situation the first time. 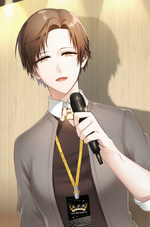 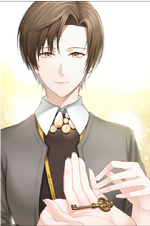 As she arrives at the party, the MC is immediately greeted by Yoosung. Zen arrives next and flirts with MC until Yoosung leaves to find Jaehee. Right after Zen wonders where Jumin was, he approaches and asks to speak with the player alone. After a proper introduction, Jumin talks about how difficult work has been after Jaehee and asks for your advice. He then asks you to be his assistant and help him figure out what he should do. Jaehee notices the two of you talking and grabs the mic, asking that Jumin return you to the party. She then states that Jumin is looking for a new assistant and that anyone who is qualified should talk to him. This sends a flurry of women after him causing him to run off. Now that the player is alone, Jaehee approaches and congratulates them on how they did with the party. She tells you how excited she is to finally meet you and how much your friendship means to her. Jaehee says that now that she isn't working for Jumin she wants to start her own small business and she wants you to join her. 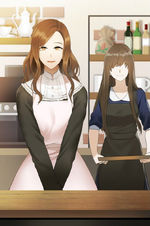 The after ending takes place six months after the party. No one has heard from V. Yoosung is working for Jumin as an intern and is evidently suffering in the position. Jumin has yet to officially hire a new assistant, saying that he intends to make Yoosung his assistant instead. Jaehee and the player's new cafe is having its official opening day, and the RFA members all plan to visit. Jumin is irritable over the whole affair, clearly still bitter that neither Jaehee nor the player wanted to be his assistant. The final scene shows the player and Jaehee, her hair now grown out long, welcoming their friends.