In the normal ending, things happen similarly to the good ending, except Jumin resigns and he doesn't reveal you are his girlfriend to the press. After a time skip to a year later, Jumin and his employees set up a surprise birthday party for you. The employees call you Mrs. Han and say how helpful and nice you've been. Jumin is proud to have you as his wife.

Like all the other main characters, there are 3 bad story endings in Jumin's route and 2 bad relationship endings if the player fails to get enough hearts by the various game branches within his route.

The player is called into a meeting with Jumin and Jaehee. Sarah and Chairman Han interrupt it. After the Chairman leaves, the player and Sarah get into a fight. Jumin enjoys watching it, and even asks Jaehee to get him some popcorn. After a time skip, the employees are talking about Jumin's girlfriend (you) being the new sales manager. Jaehee later officially introduces the player in the meeting as a new member to the company.

The player acts obsessive towards Jumin, thus provoking his desires to 'lock her up'. The player's actions do not help Jumin solve his tangled emotions, but instead provoke darker thoughts and emotions inside him. Eventually, on day 8, the only option available to the player is to ask Jumin to not let her ever escape. Jumin then ties the player up, puts tracking gadgets on the player, and alarms around the penthouse. He often alludes to a controlling relationship, using her as a replacement for Elizabeth the 3rd.

The player acts as if she is imprisoned, continuously rejects Jumin, and wants to escape the penthouse. V later comes in and convinces him to let you go home. Jumin is sorry for not letting you go and hopes to see you tomorrow in the dress he got you. When the player gets home, the hacker is waiting for you. He wants revenge on Seven, but Seven's too strong, so he wants to make him feel guilty. The hacker talks about a switch and seems to activate a bomb in Rika's apartment, killing both the hacker and the player. So it is proven that Rika's apartment is not safe yet, just like what Jumin stated.

On the 7th Day, Jumin becomes paranoid about losing Elizabeth 3rd and immediately makes plans to remodel his penthouse so that she will not escape. Jaehee arrives to convince him to return to work and that Zen's premonition was simply a nightmare. However, Jumin rebuffs her claims, insisting that Zen had only made him realize the security flaws of his penthouse. He also wants to spend more time with Elizabeth 3rd and no longer cares about the company because his father is forcing him to marry Sarah Choi. When Jaehee says that the player wouldn't be happy when she finds out about this, Jumin reminds her that they have hardly spoken to each other and asks her to leave.

Three days later, Jaehee calls Zen to inform him that the party is canceled. She tells him that since Jumin hasn't been coming to work, Chairman Han thinks he is lazy and has given him the ultimatum of marrying Sarah or losing his position as the director in the company. Moreover, the player hasn't finished preparing for the party. After Jaehee hangs up, she expresses sadness at how lonely Jumin must have felt, and that she had hoped the player would have helped him.

When Jumin comes home on day 10, the MC insists on leaving. Jumin refuses, again citing her safety. Jumin then confronts the MC about if she has lost interest in him. Before she can answer, V arrives. The MC takes this opportunity to try and escape by distracting the security guards, but Jumin quickly intervenes, and she is caught. Jumin does not understand why the MC is trying to run away, and V says plainly that it is because Jumin won't let her go home, and also mentions Seven's concerns that Jumin has been overly possessive. Jumin does not understand why the MC has an issue with him. While V and Jumin argue, the MC opens a window in Jumin's penthouse, and tries to escape.

V notices a draft from an open window, and they both see the MC trying to crawl out. V warns how dangerous it is to open the window from that height, and Jumin calls out to her. The MC jumps from the window to escape from Jumin, and is killed. 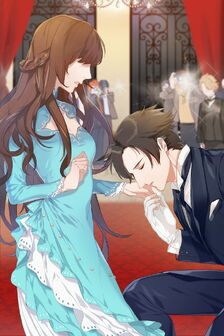 The MC arrives at the party and meets with the other members; there, it is revealed Jumin has invited his father, Glam Choi and Sarah along to the party as well as a massive crowd of reporters and other media outlets. V appears and Jumin stands before all the other members, his father, Glam, Sarah and the reporters and begins his speech; he tells the audience how he was once an unfeeling man who never felt love, but it all changed when he met a certain woman. Glam, his father and Sarah all mistakenly believe that the woman Jumin speaks about is Sarah and Sarah prepares herself to step up on stage before Jumin announces that the woman who has changed him, and the woman he loves, is none other than the MC.

Jumin reveals all that Jaehee and 707 have collected to the reporters, effectively ending Glam Choi's hold over the media and exposing her and Sarah's secret: that Sarah is actually Glam's sister and Glam forced her to get a new ID and get plastic surgery after the failure of her company, Sugar Round, in order to court and marry Jumin while Glam would marry Chairman Han. Both Sarah and Glam are shocked and unable to defend themselves as Chairman Han orders Glam to say that it's all a lie - which she cannot say, asking if this will end in a lawsuit. Sarah attempts to regain control again and gets up stage in order to confront Jumin over the evidence, saying she gave him everything, while Jumin says how can she give him everything when he doesn't even have her phone number?

The reporters rave over the news and Jumin pushes through the crowd to the MC, much to Jaehee's worry over him doing something so reckless. V reassures her that he won't - instead, he's going to do something romantic. Jumin meets the MC halfway, telling her how beautiful she looks and that he loves her with all his heart. Jumin then proposes to the MC in front of all the reporters and other members, confessing his love and thanking the MC for being there for him every step of the way. 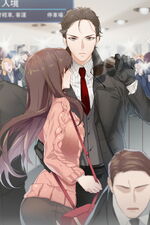 It is revealed that the player and Jumin had gotten married shortly after the events of the Good Ending. The RFA members discuss the prospects of their relationship, before going to the airport to welcome them back from their honeymoon. As both are swamped by reporters, Jumin requests the player to 'put [herself] above everyone's eyes... and put [him] in second place' as he wishes for her to choose 'a selfish life where [she] puts [herself] above everything else.' The ending concludes with Jumin answering the reporters about how he truly loves his wife.