THIS CHARACTER IS NOT AN ACCURATE REPRESENTATION OF ALL PEOPLE WITH MENTAL ILLNESS!

Mental Illness does not make you an inherently bad person. This character is dramatised for the sake of story purposes, they are fictional and not a good representation of real world mental illnesses!

If you are not a professional psychiatrist or other mental health professional, you have no right to judge how mental illness affects a person.

Trivializing and demonizing mental illness will not be tolerated. Offenders will be issued ONE warning before being blocked!

Rika is a secondary character in Mystic Messenger who founded the RFA and the girlfriend/fiance of V who tragically "died" 18 months before the events of the game. 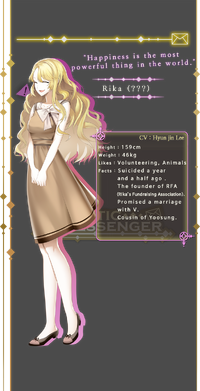 Rika is a beautiful and slender pale-skinned young woman with wavy waist-length blonde hair that transitions to a lighter color with bangs hanging on the left side, bright lime-green eyes and she is shown to be smiling most of the time.

On normal occasions, she is seen wearing a brown knee-length dress with a large cream colored bow just below her collar bone on her left side. She has also been seen wearing a formal suit with her hair placed in a high ponytail when hosting the RFA parties.

In Another Story, she wears a halter top open chest black dress and a black masquerade mask.

In Secret 01, she is seen wearing a long-sleeved dress adorned with rather intricate and elaborate designs, which represents her high rank in the Mint Eye organization.

Rika is a kind, caring, bright, strong-willed and charismatic woman on the outside that is described by the RFA members where she is said to care deeply for others and wanted to help them achieve happiness, which is the sole reason for her creating the RFA and she is also capable of inviting many people to her parties, mainly due to her great influence on others.

Unknown to most, Rika is severely mentally ill as she struggles with depression, anxiety, paranoia and (paranoia induced) delusions, which causes her to lose herself as she does things she never would've done when she had a clear mind. She tries her best to hide this from all except V, the one she trusts most.

As time goes on, her mental condition worsens, only to be intensified by the death of her dog, which she blames herself for. She falls deeply into the delusion that she's a savior, and has to rescue everyone from the pain and sins of this world. Becoming more and more out of touch with reality, this delusion drives her to do extremely harmful things, even to the people she cares about.

The name Rika is only a pseudonym and her real name is only revealed to be Mina in the Rika Behind DLC.

Within the Casual and Deep Story routes, the player (MC) has limited information about Rika. When the player first joins RFA, the player is presented with the knowledge that Rika had passed away one and a half years ago due to suicide by drowning. However, just like where she lives, the facts about her death were also so secretive and easily triggered suspicions, such as nobody ever seeing the corpse, V being the only witness to her drowning and so on.

Rika was the one to originally bring together the RFA and was the one to start the charity events for the RFA. Most of the members in the RFA are grateful towards Rika and viewed her incredibly favorably. The other RFA members reportedly went in the chatroom much less after she 'died' and the messenger only becomes active again when the MC joins.

However once the player reaches the secret endings, much of her past is shown.

Rika was adopted by Yoosung's aunt and uncle after they couldn't conceive. However, it appears as if their family life was far from happy, with her aunt going so far as to telling Rika that she regrets adopting her.

At some point, Rika visits one of V's galleries and becomes enchanted with one of his photographs, to the point where she begins going there every day, which V eventually notices. He approaches her and begins talking to her, mentioning he sees her staring at this particular photograph every day, to which she states she feels happy and loved when looking at the picture.

V then introduces himself, after gaining an interest in how she spoke and offers the photograph for free in return, they'd go out for coffee, eventually leading them to begin a relationship.

The players then find out that Rika had lived much of her life with paranoia, depression, anxiety, and psychosis, which later skyrocketed once Sally (Rika's dog) died, with Rika blaming her death on herself for not going through with the surgery, picking the 'natural' way. By this point, V sends her to see a therapist to help her cope with her mental illness, in which Rika only sees for three weeks before she decides to stop.

At this point it is hinted that she harms herself to feel better, but it's not actually stated (this is due to her asking if V wants to watch).

Eventually, Rika reaches a point where she feels as if she is compelled to save everyone, telling V that she feels better and that she's stronger and can handle herself now. This brings forth the concept and formation of Mint Eye, to which V doubts Rika, who is against their ideals. This causes a fight with each other, leading to Rika leaving and injuring V.

At some point, Mint Eye is eventually built and Rika essentially leaves RFA, which causes V to state she committed suicide to protect everyone knowing about what is actually happening.

During Secret Ending One, it is revealed that Rika is the founder of the cult Mint Eye (deemed as 'savior') and she is shown as being deeply disturbed and fixated on 'cleansing' the world and saving people. The players are also introduced to more of the backstory of Rika and how she ended up as she is now. Rika then later reveals that she originally planned to bring all of the RFA members to Mint Eye.

Rika seems to despise V at this point, calling him a traitor for being involved with RFA, stating that she's glad he's blind because she'll be free to do whatever she wants. However, V is still madly in love with Rika, stating she can 'destroy him' all she wants.

Further into the first secret ending, Rika hopes to be able to brainwash Seven implying that he is much better than his brother, Unknown. As well as stating she had no plans to kill Seven despite promising him she would. This greatly angers Unknown as he was entirely against it, as he was wanting to kill him for revenge for 'abandoning him'. Rika then scolds Unknown for disagreeing with her, implying he has no use to her now, causing great mental damage to Unknown.

At this point, Rika sends her disciples to brainwash Unknown some more, but Seven intercepts between the two, shocking Unknown before he faints due to his wound. Unknown then pulls out his gun, eventually shooting V, which causes Rika to come back to (somewhat) reality and grieves for V.

At the end of Secret Ending One, Rika is standing far from V's funeral, Yoosung mentioning that ever since his 'suicide', she had stopped talking. However, she begins talking about V being the sun, and how he is always with her.

Within Secret Ending Two, Rika is now being taken care of by Yoosung as the doctors believed it was best for someone from her family to take care of her, rather than a round-the-clock doctor. Yoosung and Zen watch her within her shared apartment with V taking photos and smiling, stating she is similar to that of a child with how happy she is.

After a while, Zen has a prophetic dream about her and tells Yoosung to send Rika away somewhere without informing Jumin and Jaehee. It's implied they do this in her best interest, and she will be better off wherever they sent her.

V was Rika's fiance and they are seen to have loved each other very much. Right before her "suicide", V proposed to her and the two became engaged. However, their relationship is highly dependent on one another to the point of it being unhealthy. Due to Rika's instability, she assaulted him which causes him to become blind. She also created a religious cult and blames V for bad things that happened to them in a twisted ideology she developed for "saving" people.

Rika is Yoosung's cousin through adoption. While the two did not meet until later on, Yoosung feels that they became close. The two worked on community service together. After the death of her puppy, Yoosung vowed to become a veterinarian. Yoosung ends up taking care of Rika after V's death. While Yoosung was very fond of Rika, it is revealed in the Secret End 01 that she hates pretending to smile and act a certain way around him.

Jumin, Rika and V are seen to be close friends. He also trusted Rika and respects her as seen most of the time, such as when he heard that there was a bomb implanted in Rika's apartment. He stated that he felt as if 'she was the only woman that understood him, could look right through him with just a glance' and he also felt as if 'he could trust her' and that 'she was the only woman, until MC came, that didn't like him just for his money'. It also seems that Jumin's feelings for Rika ran a bit deeper than friendship, as he constantly states that Rika was never supposed to be his throughout his route.

Rika is one of Zen's first fans who is also seen admiring his plays and acting. In Zen's route, it is shown when she gave him red flowers as a congratulation.

In the second and last part of the secret ending, Zen had a psychic dream that Rika would be interrogated and possibly incarcerated. But because Zen wasn't aware of Rika's deeds being "the leader of Mint Eye," the person who brainwashed Saeran and caused V's blindness; he instead strongly suggested to Yoosung that they should send her to Alaska for her to recover from her aphasia and mental illness. At first, he had a hard time convincing Yoosung but eventually was able to send Rika to Alaska believing that it was better for her to go there for treatment and hopefully recover.

Rika discovered 707 when he was a child, uncovering the unimaginable abuse he and his twin brother, Saeran, faced at the hands of their mother. She ended up turning Seven to Catholicism and helped him become baptized under the name Luciel. She also "rescued" Seven's twin from his abusive mother and took care of him right up until her breakup with V. After this, she used various brainwashing techniques to distort Saeran's view of his brother, forcing a wedge in between the two. At the end of the Secret 01 route, Rika revealed that she wanted to brainwash Seven into joining Mint Eye.

Sally was her pet dog, however around the age of seven she got cataracts in her eyes and Rika refused to pay for the surgery, causing Sally's death (she was blinded and got hit by a car). Rika is greatly depressed by this and regrets not allowing the surgery, going as far as to blame herself for the dog's death.

Yoosung's mother is Rika's aunt, but the details of their relationship remain unknown.

Retrieved from "https://mystic-messenger.fandom.com/wiki/Rika?oldid=33375"
Community content is available under CC-BY-SA unless otherwise noted.