View source
watch 02:58
No Man's Sky Update - The Loop
Do you like this video?
Play Sound

Sally was a dog that belonged to Rika, she was an abandoned puppy when Rika adopted her a week after Rika reconciled with Mika at the hospital of Rika's father.

Sally was a small golden/brown puppy with big brown eyes. She had curly floppy ears and a brown nose.

Not much is known about Sally except that Rika adopted her as a young puppy and had her until she was somewhere over 7 years old, when she began to develop cataracts. Rika refused to pay for the costly surgery, causing Sally to go blind. Due to her blindness, Sally wandered in front of a moving car and got hit by it, and as a result passed on. 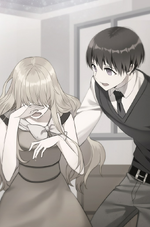 Rika was Sally's living owner. However, when Sally got old she got cataracts in her eyes and Rika refused to pay for the surgery, so Sally wandered into the road and got killed by a car. Rika feels very guilty about this and this event only added on to her depression.

In Rika Behind Story, it was shown that Sally had been on Rika's side since Rika's school days. Whenever Rika's mother scolded Rika, Sally protects her. And when Rika was exposing the pastor in the cathedral, she accompanied Rika too. When Rika's mother rejected Sally to stay in her home, Rika still kept her because Rika felt pity for being abandoned. When V suggested adopting a new puppy, Rika refused because Sally is an irreplaceable dog.

He is seen to care about Sally very much, despite the fact she isn't his dog. After her death, he states that "the vet should've known she was sad about her eyes. He's the expert" He then vowed to become a vet and protect all of Rika's pets.

When Rika brought Sally in their home, Rika's mother despised her and told Rika to send her away, in which Rika refused. When Rika turned on a legal age, Rika's mother evicted both Rika and Sally from her house.