< V
View source
watch 02:17
New Pokemon Games - The Loop
Do you like this video?
Play Sound 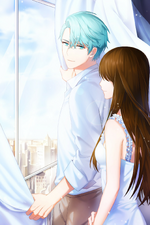 A reporter is stating how outraged the guests are at the sudden party cancellation on the day of the party, and how many of the guests say that they'll never attend a RFA party again. Jumin appears on TV and gives an explanation on the reason for the cancellation.

Back at the hospital, V turns off the tv. He is preparing to go house hunting because his current house isn't actually the kind of house he wanted, and that he had only gotten it to follow the artist stereotype and that everything inside was basically built to Rika's desires instead of his own. He goes on to list everything he actually wanted in his dream home, and asks MC to go house hunting with him. He proceeds to ask MC to move in with him the moment he is discharged. 2 years pass, and V and MC are now living together in the city, and V's now a musician like his mother. 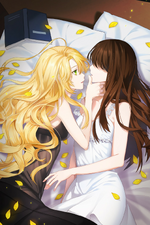 Rika feels close to the player after getting to know one another. They share a connection, and Rika confesses how she feels like she can truly be herself around the player. The player makes her feel like a person and not just "the savior" or someone who can be taken advantage of. Rika finds the player an equal to her, and in order for them to join Mint Eye they won't need to take any elixir or go through any special ceremony like other members had to. Instead, they just need to help make one last choice as to what Mint Eye is going to do about V.

The pair go downstairs to meet V in his cell. But upon arriving, they discover that V is too drugged out of his mind from Ray's torture to do anything. Due to his current state, Rika agrees with the player that it's best to just let V go. The player reminds Rika that she doesn't need V now that she has her, and it dawns to Rika that she can truly be loved instead of bound to a blinding obsession like V's love was now that she has the player by her side.

The scene shifts to Rika and the player laying in bed together wearing lingerie. Rika is reading, but the player feels like being intimate with her. Rika appreciates the player's aggressive and straight forward nature in bed together, and the two confess their love/hate/adoration for each other as they begin taking turns making love. 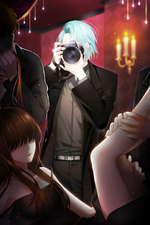 After talking with the player about his relationship with Rika, he realizes that it wasn't his style of love that was wrong in their relationship. The player convinces him that his idyllic obsession about being the sun to his lover regardless of their behavior was just wasted on Rika. He can instead focus that obsession on the player, and they can begin a relationship similar to the kind of love that he used to share with his former lover.

V wakes up in the hospital with MC by his side and he begins to talk about how he can't forget Rika and that the player must forget about him even though they wished for his happiness. He tells the player that he won’t cause any harm to the RFA and to forget him. Then we see Rika at the apartment and V appears. Rika begins talking about how everything is her fault and to forgive her, also saying how she won’t hurt the RFA anymore and to not leave her. She proceeds to say that V can do anything to her as well as hurting her, and V says it’s the only way to truly protect her. It ends with Rika saying how she will love him forever.

It is implied that V and Rika’s roles are switched so now V is going to be the one to hurt Rika, but it doesn’t matter as long as they are together.

The player is alone inside Rika's room when suddenly Ray enters with some news. With Rika’s permission, he’s able to return her back to the room he'd made for her. Apparently, Rika had detected that the player had been unhappy staying with her due to how quiet she'd been. Instead, the player will go back to staying under Ray's care; something that Ray is extremely grateful for.

As he's about to say his other self's name, they arrive in the player's room. Ray gets distracted, and begins asking the player if his story scared her or if she needs any gifts due to how it's been awhile since he'd managed to get her anything. He asks if he should bring her games to play while he's away, since it must be boring to play the same old game with the AIs.

The player corrects him, reminding him that the RFA were not AIs. Ray falters because he thought she would forget that part. Upon her correction, he slams the door of her room closed and glowers that she didn't play his game very well. He begins questioning the player on why she stopped playing? When? Was it no fun anymore? Did she like the AIs more than him? After accusing her of breaking her promise to him, he decides to leave her locked inside of the room for a while. He wants to be angry enough to hurt her, but he can't seem to do it when it's her. So instead, she’ll stay locked in the room until he decides what he's going to do with her as punishment.

V decides to go on a walk outside the cabin to get some fresh air, and the player accompanies him. While the two are out, V inquires whether or not the player dislikes him due to how she's been avoiding him. Before she can answer, they're interrupted by the familiar voice of Rika. V tells the player to go back inside so that he and Rika discuss their private matter. Alone, both Rika and V agree that the only way to end their constant battle without hurting more people is for V to accompany Rika back to Mint Eye for punishment.

The RFA party is cancelled, but Yoosung receives a strange piece of news while he is grieving; Rika is at the party venue. He rushes over to find Rika apologizing to the guests for the last-minute cancellation, and offering them bottles of wine as an apology. She tells the guests that this wine will make them and their loved ones happy, and if they want any more, they can email to the address stated on the label.

Yoosung realizes that the bottles of wine have been drugged, and prevents the guests from bringing the wine home. He tells Rika that he can finally accept that she is no longer the Rika he knew, and detains her. He tells her sadly that Jumin will help, and that he hopes she recovers.

The scene cuts to V and MC in the hospital. The news about Rika has apparently reached them. He laments that although he has resolved to no longer feel guilt over Rika, it is still difficult to completely let go of his guilt. He then tells MC that he will have his eyes operated on soon, with Jumin's assistance, and that he wants to find himself and start his life anew.

The scene cuts to a monologue of V's mother sometime in the past. It is implied that she is about to commit suicide, but a chance meeting with her child gives her new resolve to live.

The scene changes again. There is a time skip of 2 years, and the RFA has managed to organize another party. The members (sans V, who was not intending to appear) chat for a while, and disperse to their own tasks at the party leaving MC alone.

Unexpectedly, V calls out to MC. He tells her that he no longer goes by the name V, and instead uses his actual name. After a short conversation, he confesses to her and asks her to be with him.

V's After Ending is an eight episode story, each one costing 80 hourglasses, more information on each episode can be viewed Here.