< Zen
View source
watch 02:17
New Pokemon Games - The Loop
Do you like this video?
Play Sound 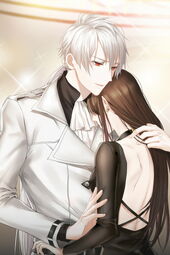 Zen delivers an honest speech to clear his name against Echo Girl's false claims about him sexually abusing her, but decides not to mention his relationship with you, keeping his private life separate from his work life.

Like the rest of the main characters, Zen has three bad endings, and two bad relationship endings which occur if you did not get enough hearts for Zen.

If the player is indifferent, or even hostile, towards Zen and the other RFA members, a bad ending will occur on Day 7.

When it gets late Zen asks if the player can stay for a while longer, to which the player replies that they're going to leave. Zen questions if the player feels uncomfortable around him, and mentions that they were often cold to him on the messenger. He asks if the player is being like this on purpose, and the player replies that they are being indifferent on purpose. Zen then apologises for not understanding the player's feelings earlier and reaffirms his love for them, before shyly asking if they wished to spend the night with him. In the following chatroom, Jumin asks the player if they had convinced Zen to model for his cat food commercial, as that was the original intent of the visit, to which the player curtly responds no. The player also tells Jumin that they are spending the night at Zen's place, which Jumin disapproves of, and urges the player to return to the apartment so they can proceed with working on the party. Back in Zen's room, Zen tells the player that their indifferent attitude had added fuel to his feelings for them and hints that he wishes to make love to them.

One year later, Zen is preparing for an acting gig that he is co-starring in with another actress. His response to the player implies that the player is jealous, which amuses him, and he reminds them that he reaffirmed his love for them last night. He promises to come home early to them. It is implied that they are now living together.

If the player urges Zen to quit his job and focus on the player, a bad ending will occur on Day 9.

From the player's insistence, Zen is pressured to quit despite wanting to continue his dream. When Jumin finds Zen at his secret place, he offers to help him under V's advice. He quotes V, saying that nothing "beats the truth." Upon hearing this, Zen impulsively asks Jumin to arrange an interview with a talk show host despite lacking evidence.

As Zen's interview is broadcasted live, Jumin and Jaehee watch from the penthouse. Zen begins relaying his meetings with Echo Girl, mentioning that she liked him because she was a fan of how he looked as well as his musicals. However, the talk show host is confused, since Echo Girl had never expressed interest in musicals before. Zen becomes increasingly flustered when the talk show host is dismissive and doesn't seem to believe him, and, in the end, has a public meltdown. This causes Zen to lose more credibility and results in people violating his privacy.

At Jumin's office, Echo Girl approaches Jumin and Jaehee, bragging about her victory. Since she was advised by her manager to keep quiet, this has only further turned the media against Zen. When she leaves, Jumin instructs Jaehee to keep the media from Zen so that his career won't deteriorate even further.

One year later, Zen is struggling for acting jobs, but still remains hopeful that his "dry season" will pass. He asks the player to wait for him for a couple of years before he is able to rebuild his career again. 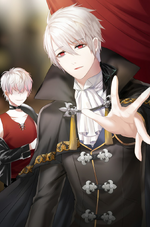 If the player refuses to follow Seven's orders and suspects RFA, a bad ending will occur on Day 10.

The player blames Seven and RFA for hiding the fact that Rika's apartment is rigged by the bomb and is unable to trust them with her safety. When Unknown breaks through the window, he slowly approaches the player and introduces himself as an angel, ready to take her away to paradise. With no one to depend on, the player willingly accepts.

Through a monologue, Unknown tells a story that parallels what happened to him and the player. He reveals that the princess (the player) chose the angel (Unknown) over the prince (Zen), as the prince was in a group who betrayed her. The prince had arrived to rescue her, but was too late. Though he fought back at first, eventually he succumbed to being brainwashed.

Zen vaguely remembers his feelings for the player, but doesn't recognize her in his brainwashed state. Unknown upholds Zen's dream to become an actor, and harshly grills him on his performance when he feels he isn't insincere. He tells him that it will take him a while before he is ready to go up on stage.

If the player misses the majority of the chats or gives more hearts to other characters from Days 5-7, a bad ending will occur on Day 7.

After visiting Zen, the player decides to immediately go home. Zen lets her, though he admits that he wishes she went on the messenger more, as they aren't close as they could have been. In the following chatroom, Jumin asks if the player convinced Zen to star in his cat food commercial, as that was the original intent of the visit. The player doesn't seem to remember that. Jumin says that while he understands the player has a busy life, she still needs to be active in the chatrooms in order to plan the parties together.

Once the player reaches Rika's apartment, she opens the door to find Unknown inside, waiting. He is disappointed at the player's lack of dedication and resolves to find someone more suitable to run the parties. Because the player failed, he has no other choice than to forcefully take her to Magenta.

On the night of the 10th Day, Zen does not arrive in time to save the player. Unknown breaks into the apartment via the window. When the player asks who he is, he describes himself as an angel ready to save her from this "boring game." He says that he can tell that the player is bored of waiting and replying without getting anything in return, and he promises her skills will be more valuable at Mint Eye. Assuring her that he is not a kidnapper, Unknown asks her to follow him into Magenta, a place of paradise, where she will be much more appreciated and loved than she currently is now, and promises to protect her.

As Unknown takes the player away, he takes off his mask and speaks in his normal voice. He is excited that the player is now "his" and tells her that where he will be taking her is much more fun than the "game" she is playing. They set off to Mint Eye together. 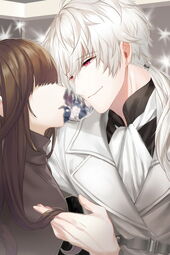 When Zen and the player arrive at the party, they are ambushed by reporters, anti-fans, and supporters at the door. One of Jumin's bodyguards help them enter, where they encounter Jaehee. Yoosung has arranged a witness to prove Zen's innocence to provide a testimony at the press conference, and while Jaehee and Zen go onstage to prepare, Yoosung is asked by Zen to watch over the player. Though V is coming to the party with Seven, Jumin assures the RFA that they are on their way.

Jaehee opens the party with a welcome speech, and Zen begins delivering his statement regarding his scandal with Echo Girl. Rather than delivering a sensationalized speech like Jumin suggested, he instead gives an honest speech where he discusses how his past has affected him to the point where he can tell who genuinely appreciates him for his talent. To drive his point through, Echo Girl's old social media posts are distributed for the press, and the goldfish bread vendor gives his witness testimony. This helps clear most of the charges against Zen.

As Zen no longer wants to live behind a fabricated image, he makes the decision to be honest about his private life too. He calls the player to the stage and introduces her as his girlfriend before confessing his love for her. 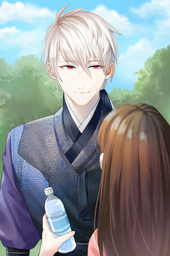 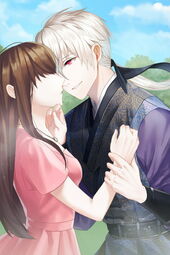 Two years later, in Jumin's penthouse, Jaehee worriedly wonders where Seven and V are, but Jumin has turned on his old television to watch A! Celebrity News, conveniently watching Echo Girl and Zen's interview on their latest period drama together. Echo Girl is flustered when she is asked about her scandal with Zen, and struggles to be taken seriously as an actress regardless of her idol singer origins. Zen, however, has topped multiple music charts with the soundtrack albums he participated in, and is now a highly successful actor. Jaehee asks Jumin if he arranged them to be starring in the same drama, to which Jumin assures her that Echo Girl would have been casted in a minor role if he had. However, he does intervene by ordering the broadcast company not to edit out Echo Girl's real name when Zen accidentally says it out loud during his interview.

At the filming location, the actors take a break after a series of multiple outtakes caused by Echo Girl's lack of skill. Zen retreats to the player, who is now his manager. He declares his love for her and is excited to see her every hour for every day.